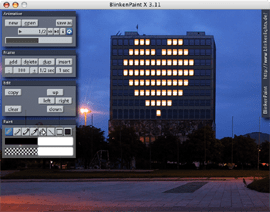 On September 11th, 2001 the famous “Haus des Lehrers” building at Berlin Alexanderplatz was enhanced to become world’s biggest interactive computer display: Blinkenlights. The upper eight floors of the building were transformed in to a huge display by arranging 144 lamps behind the building’s front windows. A computer controlled each of the lamps independently to produce a monochrome matrix of 18 times 8 pixels. During the night, a constantly growing number of animations could be seen. But there was an interactive component as well: you were able to play the old arcade classic Pong on the building using your mobile phone and you could place your own love letters on the screen as well.